This history begins some twenty years before the present building was built, when in 1870 a group of local worthies established a Literary Institute in a private house at an at present unidentified location in the High Street. It had a reading room and small library of about 100 volumes and was open from 10 a.m. until 10 p.m.

In about 1890 the owner of the premises reclaimed them as a private residence and rather than lose so valuable a resource the Institute’s Secretary, Horace Ridley, a pharmacist and stationer in the Market Square, knowing that the Rothschild family had provided similar facilities elsewhere, was instrumental in persuading the then Lord Rothschild to do so for Princes Risborough

Lord Rothschild had previously, in 1878, purchased from Mrs. Elizabeth Ayres her farm, comprising the farmhouse and a cottage fronting on the High Street, with farmyard and outbuildings accessed by a covered way that still exists, with its guard stones either side to protect the walls of the adjacent buildings from damage by wagon wheels.

The Cottage and Ayres’ Farm, to the right of

Lord Rothschild, decided to demolish the farm cottage and replace it with both the present Institute building and a new adjacent cottage. It is unclear what part the cottage played in the first decade of the Institute’s existence, but in 1902 the Trustees were able to lease it from the Rothschilds for a nominal rent as the Caretaker’s Residence and then were able to buy it outright in 1928, when the Rothschilds sold the farm back to the Ayres family and the cottage to the Institute’s Trustees, subject to its being held on suitable Trusts in connection with the Institute.

The Institute had always lacked one important asset, the right to any of the land to its rear, all of which had remained part of the main farmhouse estate, with only a right of way to deliver wood and coal via the covered way. The opportunity to remedy this was seized when in 1932 Charles Ayres sold the farmhouse and the Close behind it to Raymond Hester & Sons, family jewellers now Hester-Clarke of Aylesbury. Hester offered to sell the land, “approximately 52ft in width and extending to the large barn behind the Institute and Cottage” and at a Management Committee meeting on 24th February 1933 it was reported that the purchase had been completed and the Deed deposited at the Bank. 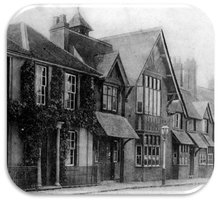 The new Institute was formally opened as a Library, Reading Room and Lecture Hall on 27th February 1891, on a lease to six Trustees and a Management Committee ‘for the term of one thousand years [for] the annual rent of one peppercorn on the thirty first day of December in each year if the same shall be demanded’. In her opening address Lady Rothschild observed that she was glad to know that the Institute would be open to both ladies and gentlemen, providing double the pleasure.

The Deed of Gift from Nathaniel Mayer, Lord Rothschild to the Institute Trustees

The first Trustees were the Rev. Henry Meeres, George Stratton, Farmer Thomas Parsons, Brewer Arthur Ives of Princes Risborough Farmer, Timothy East, Coal Merchant and John Eggleton, Farmer Within a few years the Institute was also serving as the Magistrate’s Court, which had originally been held at the Cross Keys Inn and later at the George & Dragon. Such was the law-abiding nature of the townsfolk that Sessions were only ever needed on one morning a month. Sadly, in 1980, this function was transferred to a central court in Aylesbury and a centuries-old tradition of local justice administered by local people came to an end.

In 1905 the Trustees offered to fund the purchase of a Billiard Table for the Institute and on 16th January 1905 the Minutes record a proposal that ‘the billiard table be accepted and placed in the Reading Room, and when paid for be handed over to the Institute Committee’.  Although this was strictly a departure from the terms of the grant it was clearly seen by the Committee as a valid addition to the social amenities of the Institute and so it has proved to be as, with changes in social habits and diminishing use of the literary facilities, the billiard (now snooker) table became the mainstay of activity at the Institute.

By 1945 there was clearly concern amongst the Trustees and Committee that the building was not being fully used as specified in the Deed of Grant and was beginning to lose its identity as a Literary Institute. The questions of additional uses and possible alteration or extension of the building were discussed, but the then Secretary, Robert Bailey, gave a very bleak interpretation of the Deed of Grant, warning that any departure from its terms would result in reversion of the building to its owners and unfortunately, even though it was just such a departure that had caused the concern, this brought discussion to a halt. It is interesting to reflect that a bank balance of £130 17s 2d was then considered perfectly satisfactory and according to the Bucks Free Press the most noteworthy decision of the meeting was a new rule, “dogs not be allowed in the Institute”.

The Management Committee battled on, supported principally by the snooker-playing members of the Institute, but it seems that a crisis arose in the early 1960s when significant repair and maintenance work became necessary. Without an endowment the Trustees and Committee had little alternative than to realise the investment made back in 1933 and sell the cottage and its garden to be replaced by the Westminster Bank, now the NatWest.  In a further attempt to secure the future an approach was made to the Charity Commissioners in 1971 about converting the original Trust Deed to a Charitable Trust, but once again the question of reversion and appropriate use proved a hurdle too many.

What of the future? Although with the sale of the cottage the Institute now had much greater financial security, concern about interpretation of the Deed of Gift continued to hamper further development, with the Snooker Club, as it became known, remaining the mainstay, supported by occasional letting of what had been the upstairs lecture hall.

Author’s Note: I am grateful to the Trustees and Management Committee of the Princes Risborough Literary Institute for allowing access to documents appertaining to the Institute, and to Mr. Paul Turnell for providing information abstracted from the Buckinghamshire County Archive.